In the last few months, we were lucky enough to expand our team to include a new member, Daniel Beer. We are not only fortunate to have him on our team; we were also able to work side by side while planning his wedding with his partner Mark! 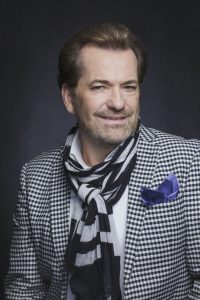 With dual degrees in music and cosmetology, Daniel is a jack of all trades with an eye for detail. He started his career as a hairdresser and, in quick fashion, worked his way up the chain to become the National Technical Director of Anasazi, a professional hair treatment line where he managed a team of over 40 educators. He was also a manager of the salon and spa at Saks Fifth Avenue. After a 32-year career that took him from Houston to Chicago to the heart of Manhattan, Daniel decided to move to Bakersfield to pursue a role in the world of events.

In particular, weddings hold a special place in his heart — especially for someone who recently celebrated his own NYC-themed nuptials (complete with a Studio 54-inspired reception!). His creative approach to design helps him to visualize a couple’s dream wedding to new heights, in an effort to create a day that is memorable and impactful for both the couple and their guests.

Although he no longer lives in The Big Apple, the city still draws him in with its Broadway musicals and exquisite culinary scene (not to mention the shopping). At home, Daniel is the host with the most as he brings his event planning chops to his living room. He loves to entertain friends and family, whether it’s a small dinner party or an outdoor bash. As long as there is great food, music, and people, Daniel is in his element.

Daniel, we are so thrilled to have you on board!